(CARMEL, IN) – The Indiana Municipal Power Agency (IMPA) is pleased to announce a new Economic Development Incentive for existing and prospective customers. Provided that the customer meets a certain criteria, the program can save companies a percentage off of their electric bill for a 5 year period.

“IMPA is continually looking for opportunities to assist our Members, with their economic development efforts,” said Raj Rao, IMPA’s President and CEO. “Electric costs can be a determining factor for companies while they’re selecting where to improve existing facilities and where to establish new operations. With our competitive rates, hopefully, this new incentive will give our member communities an advantage when marketing their communities
for prospective economic development projects.”

END_OF_DOCUMENT_TOKEN_TO_BE_REPLACED

GREENFIELD, Ind. – On Wednesday, June 28, more than 150 people gathered at the groundbreaking ceremony for BeijingWest Industries, Co. Ltd. (BWI). The company is a premier chassis supplier that designs and manufactures brake and suspension systems for the global automotive market. Its first U.S. production facility will be located in Greenfield, creating up to 441 new, high-wage jobs by 2021.

BWI will invest more than $80 million to build and equip a new 276,514-square-foot manufacturing facility in Greenfield’s Progress Park. With its growth, BWI expects to increase its production by 4 million parts per year to meet the continued demand from its customers, which include Audi, BMW, Ferrari, Ford, General Motors, Honda and Porsche.

END_OF_DOCUMENT_TOKEN_TO_BE_REPLACED

Apartment complex to be built in business district

GREENFIELD, IND — A new apartment complex featuring amenities that encourage healthy living — including bike and walking paths and a community garden — is coming to Greenfield.

A developer with a history of Hancock County projects is working with city officials to build a multi-family living community just north of Interstate 70 in Progress Park, Greenfield’s business district.

END_OF_DOCUMENT_TOKEN_TO_BE_REPLACED

More than 100 people were in attendance for the HEDC annual meeting, including board members, elected officials, developers, business leaders, utility representatives, and more.

END_OF_DOCUMENT_TOKEN_TO_BE_REPLACED

the recipient of the first “Nolan ‘Skip’ Kuker Community Leadership Award”, presented by the Fortville / McCordsville Area Chamber of Commerce at their annual dinner on Friday, Nov. 11, 2016.

“I am honored and humbled  by this recognition from my friends in Fortville/McCordsville,” Kuker said. “I love working for our community and look forward to meeting those in the future that are selected for such an honor.”

END_OF_DOCUMENT_TOKEN_TO_BE_REPLACED

It’s one of two Greenfield sites owned by the Barr family receiving the certification. Barr North received certification in July.

“The City of Greenfield is fortunate to have great citizen land owners who see great value in doing the things necessary to prepare sites for development,” said Greenfield Mayor Chuck Fewell. “The Barr family is an asset and we certainly appreciate their contributions to our economic development efforts.”

END_OF_DOCUMENT_TOKEN_TO_BE_REPLACED 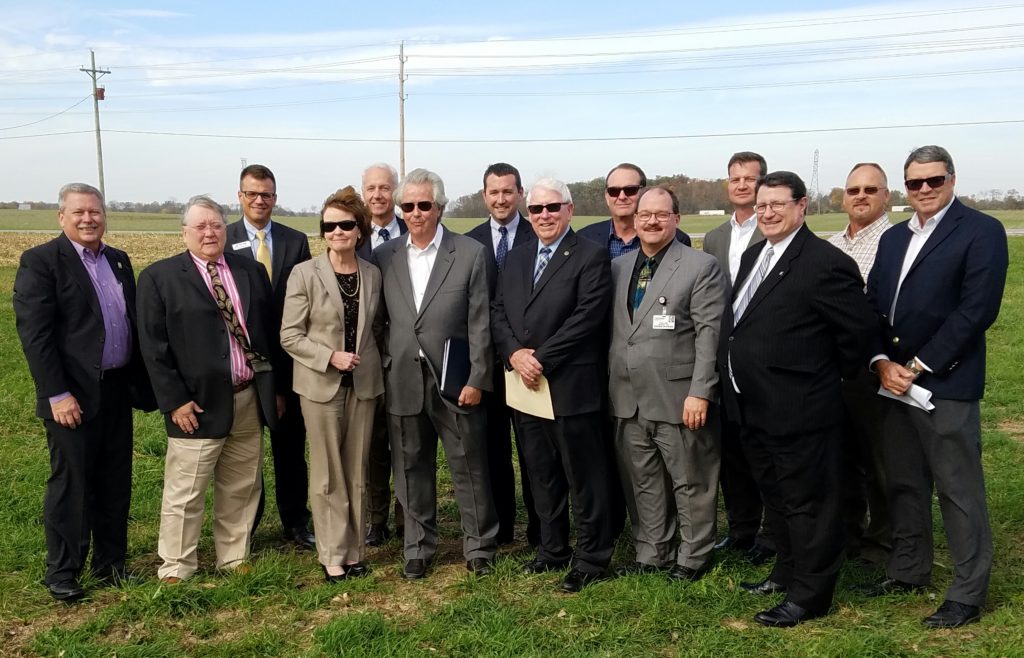 The Indiana Site Certified program was created to help Indiana cities and towns by validating sites that are ready for economic development. By certifying a site, it illustrates that the community is committed to economic growth, mitigates risks for businesses who want to locate or expand their operations into Indiana and it serves as a marketing tool to promote sites that are ready for development.

END_OF_DOCUMENT_TOKEN_TO_BE_REPLACED

GREENFIELD — Just a few months ago, the vista outside Brandon Reeve’s office window consisted mostly of dirt and stubbly grass, he said.

Reeve’s company, Applied Fabricators, moved into the Greenfield industrial park just north of Interstate 70 in the western portion of the county in early 2015. Since then, he’s watched firsthand the boom in development taking place in the company’s backyard, with businesses popping up fill a third of the park’s space.

It’s a turnaround county officials say is a long time coming; and with about 60 percent of the land in the county’s seven industrial parks, which span about 1,000 acres, still available, they hope the growth in Alliance Interstate Park will continue to attract more developers to the area.

END_OF_DOCUMENT_TOKEN_TO_BE_REPLACED

About two-thirds of Hancock County, just east of Indianapolis, lacks public water or sewer service. Wells and septic tanks suffice, but not for officials trying to attract large businesses or residential developments.

“This 38,000 acres essentially has been frontier,” said Michael Burrow, president and CEO of NineStar Connect, a Greenfield-based electric and fiber-optic communications cooperative.

But that’s about to change.

END_OF_DOCUMENT_TOKEN_TO_BE_REPLACED

Greenfield, Indiana – Bastian Automation Engineering, a division of Indianapolis-headquartered Bastian Solutions, is in the final stages of a multi-year project with a US-based aircraft engine manufacturer to design and build a custom Lift Platform Vehicle. The vehicle is comprised of a variable height work surface that will be used by operators during Jet Engine testing procedures. The project generated 10 man-years worth of work for local engineers and manufacturing personnel as well as over $300,000 in domestically sourced materials.

END_OF_DOCUMENT_TOKEN_TO_BE_REPLACED

Since 1985 HEDC - here to serve Hancock County through the attraction & retention of quality jobs. HEDC can help your company & provide confidential service.